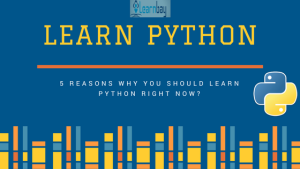 Here is why You should Learn Python over any other Programming Languages:

Python has hundreds of third-party modules that make Python to interact with other programming languages and compatible with most of platforms.

Python is one of the easiest language to learn and can be learnt as first programming language.First time programmer can learn python quickly .Beginners can learn basic python by their own and also there are many institute which offers python training ,where you can enroll and learn. You need to find a good python training institute.

“Python is the future of  Artificial intelligence”.With modules like numpy,scipy,Pandas Python dominates the  data science and machine learning space and  became one of the  preferred language for computer science research.

With modules like django and Flask,Web applications can be developed in python very quickly.web development features that takes hours in PHP could be done in minutes using Python in less time and with more reliable and better code.Python is used in almost every kind of automation and is replacing TCL,Perl,Shell scripting.

With Python ,Development time is minimized.With Python  code can be developed quickly, complex applications can be built with minimal lines of code .